The Jaguars informed Jalen Ramsey‘s agent that they will not negotiate an extension with him this year, according to the cornerback (Twitter link via John Reid of the Florida Times Union). Despite the hiccups, Ramsey was in attendance for the start of the club’s mandatory minicamp, unlike teammate Yannick Ngakoue who is in a similar boat. 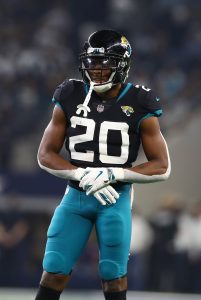 Ramsey was asked if the team declined to discuss an extension because of the team’s cap situation and he was unsympathetic to those potential constraints. “The money’s always there,” Ramsey told reporters.

Last year, the 24-year-old (25 in October) tallied 65 total tackles and three interceptions en route to a second career Pro Bowl nod. He had similar numbers in 2017, leading him to a First-Team All-Pro nod.

However, he has clashed with team brass in the past and has been vocal about his desire for an extension, so that could be cause for pause in Jacksonville. In February, the Jaguars picked up Ramsey’s fifth-year option, tying him to the club through the 2020 season. Beyond that, the Jaguars can theoretically keep Ramsey away from the open market via the franchise tag.