For a second straight offseason, the subject of Julio Jones‘ contract has been a key offseason Falcons talking point. But next week, the All-Pro wide receiver will be with the team when it conducts its minicamp. 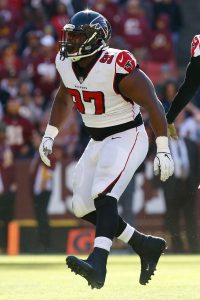 Dan Quinn confirmed (via The Athletic’s Jeff Schultz, on Twitter) the ninth-year receiver will show for minicamp, which begins June 11. So will fourth-year defensive end Vic Beasley. It is not yet certain if franchise-tagged defensive tackle Grady Jarrett will join them, though Quinn anticipates he will. Skipping mandatory minicamp would cost the trio nearly $90K each.

Regardless of the statuses of Jones, Jarrett and fellow extension candidate Deion Jones, the Falcons expect to re-sign all three. He did not specify a plan for Beasley, who joined the group in staying away from Falcons OTAs.

“We have a salary cap. We have limits that we have to think about not only today but tomorrow, and we have to balance all that off,” Falcons owner Arthur Blank said, via Vaughn McClure of ESPN.com. “But these are three great young men that we care deeply about, both personally and professionally. They are going to be Falcons for life.

“I’m not worried about getting the deals done. I’m speaking on behalf of Atlanta and Atlanta fans. Thomas [Dimitroff] is working hard to get them done. Coach Quinn is supportive as well. It will happen. It’s just a matter of when.”

A new deal for Jones has been rumored for weeks now, and it will almost certainly make the 30-year-old receiver the league’s new highest-paid player at the position. Two seasons remain on the five-year, $71.25MM extension he signed in 2015. Jarrett is tethered to a $15.2MM franchise tag. Jones would have the most to gain by signing an extension before the season. The former second-round pick’s rookie deal pays him just $1.45MM. The Falcons picked up Beasley’s fifth-year option (worth $12.8MM) last year.

The Falcons, though, are light on cap space ($6.5MM, the fifth-lowest figure at the moment), so it will take some work to fulfill Blank’s vision.