The Falcons and Julio Jones are working on a long-term extension, but depending on who you ask, that deal might already be in place. Multiple league sources “firmly believe that the Falcons already have a wink-nod deal in place” with the wide receiver, according to PFT’s Mike Florio. 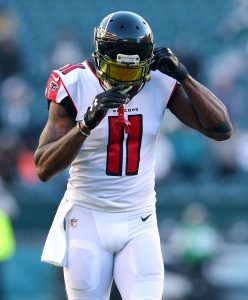 Those sources believe that Jones’ deal will be finalized on Friday, the one-year anniversary of Jones’ last re-up with the team. The deal, which should position Jones as one of the highest-paid wide receivers in the league, by at least a couple of metrics, may impact the talks between the Saints and star Michael Thomas.

Jones is reporting to Falcons camp, despite the absence of a new deal. The optimism he expressed earlier this summer may be an indication that a deal is not far off.

“Mr. Blank gave us his word. … That’s golden,” Jones said in June. “His word is that it’s going to get done. … There’s no stress on my end. I’m not thinking about it. [Blank] makes it easy for me to go out and just work every day and not have one of those situations where there’s a holdout or anything like that.”

Jones’ 7,994 receiving yards since the 2014 season are the most any player has ever compiled in a five-year span.