The Jaguars offered a new deal to Yannick Ngakoue, according to Tom Pelissero of NFL.com (on Twitter). Surprisingly, they pitched a short-term two-year deal to the youngster – a contract worth over $19MM per year with $50MM+ over the first two years. After that, Ngakoue’s camp broke off talks with the Jags. 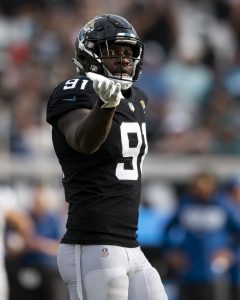 Still only 24, many figured that the Jaguars’ eventual offer to Ngakoue would be of the long-term variety. Apparently, the Jaguars appear willing to save some money in the near term and forego the opportunity to lock the Maryland product down through the majority of his prime seasons.

We don’t know the length of the Jaguars’ (declined) proposal, but from the sound of it, they probably pitched something less than four years. Meanwhile, Ngakoue is aiming higher. This offseason, Frank Clark inked a five-year, $105MM deal with the Chiefs with $62.3MM guaranteed. Meanwhile, Demarcus Lawrence signed a similar deal with the Cowboys that included $65MM in total guarantees. For reference: Clark is 26, Lawrence is 27, and Ngakoue just turned 24 in March.

After Clark and Lawrence nabbed deals worth ~$21MM per year on average, Ngakoue is unlikely to take any less. He’s also