Colts wideout Reece Fountain suffered a dislocated and fractured ankle during practice today, according to Ian Rapoport of NFL.com (Twitter link). Fountain will likely undergo immediate surgery and should be expected to miss the 2019 season. 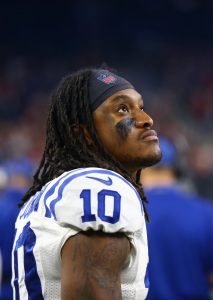 A fifth-round pick in 2018, Fountain didn’t make it through final cutdowns and was waived just prior to the start of the regular season. The Northern Iowa product was promoted to the Colts’ active roster in December, but played only six total snaps (three offense, three special teams) and didn’t record any statistics.

Fountain was far from a lock to make Indianapolis’ roster this season, as the club boasts receving options such as T.Y. Hilton, Devin Funchess, Parris Campbell, Chester Rogers, and Deon Cain. The 23-year-old Fountain will likely be placed on injured reserve, but could compete for a role in 2020.