Tom Moore To Stay On Buccaneers’ Staff For 2019 Season

The Buccaneers will have another key voice on offense this season. Bruce Arians brought in Tom Moore as an offseason consultant for his first Bucs squad, but Greg Auman of The Athletic notes (on Twitter) the veteran assistant will stay on Tampa Bay’s staff all season. 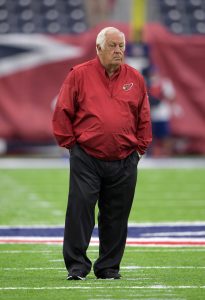 Moore and Arians have worked together for decades, their tenures overlapping with the Colts from 1998-2000 and on Arians’ Cardinals staffs. Now 80, Moore has worked as a consultant for a few teams this decade — including the Jets and Titans — but is most known to this generation of NFL fans as Peyton Manning‘s OC in Indianapolis.

Previously serving as OC for the Steelers and Lions in the 1980s and ’90s, Moore has been in coaching since the early 1960s. His first NFL job came as wide receivers coach for the bulk of Pittsburgh’s John Stallworth–Lynn Swann tenure. Moore oversaw Arians’ work in Indianapolis, with the current Bucs HC working as the Colts’ QBs coach for three seasons.

Moore presided over 13 top-10 scoring offenses, at least two at each OC stop. Arians, Moore and OC Byron Leftwich will be tasked with helping Jameis Winston revitalize his career in a contract year.