O.J. Howard might be on the block, after all. The Buccaneers would be willing to part with the athletic tight end for a “substantial offer,” Jenna Laine of ESPN.com (on Twitter) hears. 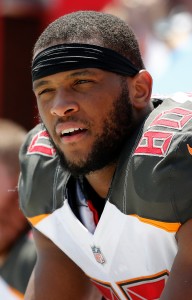 Multiple teams have inquired on Howard in recent weeks, even as the Buccaneers told the world that he was not available. With ~24 hours to go before the October trade deadline, the Bucs may be willing to move him to a contender in need of a playmaker.

For the most part, Howard hasn’t been used all that much in Bruce Arians‘ offense. Through six games, Howard has just 13 grabs for 176 yards and zero scores. Last year, in ten games (eight starts), Howard managed 34 catches for 565 yards and five TDs. Arians might not have lots of ideas for Howard, but plenty of other teams would love to add a tight end of his caliber with deep threat potential.

The Patriots are said to be interested in the former first-round pick, though they also have other tight end targets in mind, such as Bengals notable Tyler Eifert. Howard would represent a younger option – he won’t turn 25 until November.