Kyle Allen will make his fifth consecutive start for the Panthers next week. The second-year UDFA will get the call again when the Panthers face the 49ers in San Francisco, Ron Rivera said Monday, per The Athletic’s Jourdan Rodrigue (on Twitter). 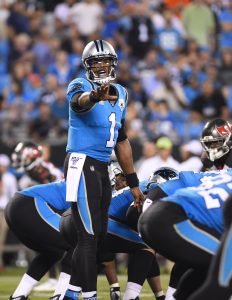 It was believed unlikely that Cam Newton would return from his foot injury this week, but Rivera’s announcement ends any speculation. The ninth-year starter will, however, work out on a side field. The Panthers have not reached the quarterback-controversy stage of this process, with Newton not yet ready to return. But that day could be coming, and this week’s game will be telling for Allen’s progress (and the Panthers’ status as an NFC contender).

Facing the undefeated 49ers will be Allen’s greatest challenge since taking over under center. When Allen took over, the Panthers were 0-2 and looked likely to fall out of the playoff race. Instead, they have won four straight and are in prime position to fight for an NFC playoff spot.

In his four appearances this season, Allen has completed 65.6% of his passes for just over 225 yards a game. He has a 7-to-0 touchdown pass-to-interception ratio. Should Allen fare well against the 49ers, Rivera may have to make a tough decision. But the Panthers are not at that point yet.

8 comments on “Panthers To Start Kyle Allen In Week 8”