There could be more trouble for Raiders linebacker Vontaze Burfict. Burfict was tossed out of last Sunday’s game against Indianapolis following his helmet-to-helmet hit on Colts tight end Jack Doyle, and the NFL informed Burfict in a letter several days ago that it found another helmet-to-helmet hit from the same game, according to Ian Rapoport of NFL.com (on Twitter). The league will use both hits in its case against Burfict as it moves to suspend him for the rest of the season. 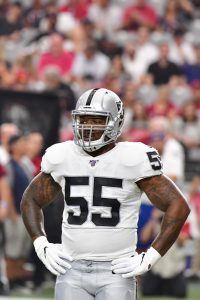 Burfict’s agent, Lamont Smith, has predictably taken exception to the league’s reviewing Colts-Raiders tape to find another illegal (but unpenalized) hit in addition to the one that led to Burfict’s ejection. In a full-length piece, Rapoport says Smith will argue that the NFL has singled out Burfict and is treating him differently than other players. But, given that Burfict’s history of violent play is largely unprecedented, that may be a tough argument, and Jason La Canfora of CBS Sports says Burfict is likely to lose his appeal.

Indeed, Burfict’s actions on Sunday, combined with his 13 suspensions and fines across seven seasons with the Bengals, make this a tricky case for the veteran and his reps. It’s also worth noting that Hall of Famer Derrick Brooks – who upheld Burfict’s three-game suspension in 2016 after his controversial hit on Antonio Brown – will be presiding over the hearing.

If the 12-game suspension stands, it will go down as the longest one ever levied for an on-field incident.