Stephon Tuitt left Sunday night’s game midway through, and he’ll miss the rest of the season due to the chest injury he suffered. The Steelers fear they may be without one of their long-tenured defensive ends for a while, with Ian Rapoport of NFL.com reporting (video link) the team has concern Tuitt suffered a torn pectoral muscle. 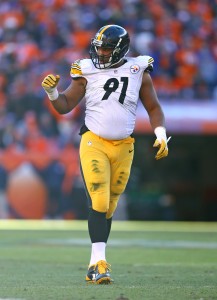 Surgery is ahead for the sixth-year veteran as he watches the Steelers from a distance. It all has to be extra frustrating for Tuitt as his Steelers are 2-4 through six games.

Tuitt and Cameron Heyward have served as Pittsburgh’s defensive end starters for the past five seasons. Both are playing on high-end extensions and play key roles for a Steelers team that’s seen productivity from its pass rush this season. Tuitt was on pace to eclipse his single-season sack high (6.5 in 2015), having recorded 3.5 in six Steelers contests.

Heyward and Tuitt exited Week 6 as the NFL’s fourth- and sixth-best interior defenders, per Pro Football Focus, so losing the former second-round pick is a considerable blow for Pittsburgh. Pittsburgh has veteran backup Tyson Alualu and sixth-round rookie Isaiah Buggs as backup defensive ends. Alualu would be the next man up opposite Heyward.