Former Seahawks defensive tackle Malik McDowell has been sentenced to 11 months in jail and three years of probation after pleading guilty to numerous crimes, including a DUI, a fight with police officers, and a stolen property offense, as Brady Henderson of ESPN.com reports. 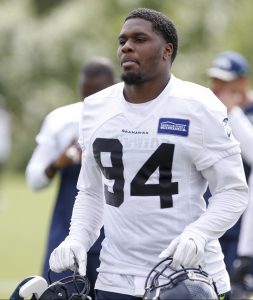 “I’m doing everything I need to do, seeing all the doctors I need to, working out…doing everything I can to get back to where I was, back to the NFL,” McDowell said, and added that he’s “very remorseful,” as Aileen Wingblad of the Oakland Press writes.

Seattle selected McDowell with the 35th overall pick in the 2017 draft, but he never managed to actually get on the field. The former Michigan State Spartan was injured in an ATV accident three months after being drafted and spent the first two years of his career on the non-football injury list. The Seahawks officially waived McDowell in March, and are currently suing him to recoup a portion of his rookie contract.

McDowell received a two-game ban from the NFL earlier this year, but clearly, a league-imposed suspension is the least of his worries. The Cowboys worked him out after he was released by the Seahawks, but Dallas’ doctors weren’t able to give him a clean bill of health. Given his legal issues and his injury questions, McDowell isn’t likely to play in the NFL again.

9 comments on “Malik McDowell Sentenced To 11 Months In Prison”