Justin Simmons has delivered a strong contract year for the Broncos and is set to be one of the 2020 free agent market’s top safeties. But both sides would prefer the fourth-year defender does not reach the market. 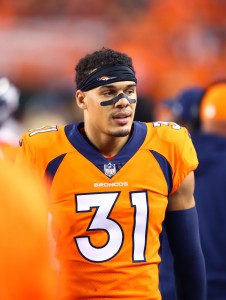 John Elway said Tuesday during a radio interview with KOA Radio the team plans to retain Simmons, per Nicki Jhabvala of The Athletic (on Twitter). Whether that means via franchise tag or long-term commitment, the Broncos do not want to lose one of their best draft investments since the Super Bowl years.

Simmons and the Broncos engaged in extension talks before the season started, but the former third-round pick bet on himself this season. That’s worked out, with Simmons notching a career-high four interceptions and 14 passes defensed (tops among safeties this season). The Boston College product made it clear he would like to stay in Denver.

“I’d love to be here; this is home,” Simmons said, via Jhabvala (Twitter link). “… Being able to come in and earn the starting spot and kind of solidify that, it’s just been great. I just hope, with that being said, it works out on both ends. Because obviously I’d love to stay, and I’ve built so many great relationships.”

To keep Simmons off the market, it will probably take an eight-figure-per-year offer. The Broncos already have a top-market safety contract on their books in the $11MM-AAV deal they gave to Kareem Jackson this year. Jackson’s deal was initially categorized as a mid-level cornerback pact, but the team moved him to safety. Jackson’s contract is only guaranteed through 2020.

The Broncos also have their franchise tag as an option; a safety tag is projected to cost approximately $11.5MM. Re-upping Simmons in advance of his age-27 season would help matters for a defense that has several key contributors as free agents-to-be. Standout cornerback Chris Harris joins defensive end starters Derek Wolfe and Shelby Harris as players set to hit the market.