Freddie Kitchens was one-and-done as the Browns’ head coach, but he could land on his feet in New Jersey. New Giants head coach Joe Judge is expected to speak with Kitchens about a spot on his offensive staff, a source tells ESPN.com’s Jordan Raanan (on Twitter). 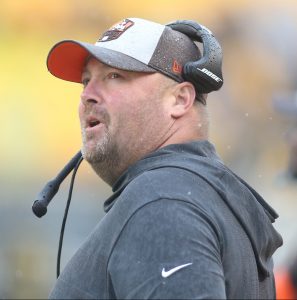 Kitchens and Judge worked together at Mississippi State, so the two coaches have history together. Kitchens’ stock has obviously cooled over the last year, but he was largely credited for the Browns’ progress on offense in 2018 and the development of quarterback Baker Mayfield.

Judge could view Kitchens as a quality mentor for his own young QB, Daniel Jones. It’s not clear whether Kitchens would be considered for the offensive coordinator role, however, or a different job on that side of the ball.

Kitchens ascended from associate head coach/running backs coach to the Browns’ OC job midway through the 2018 season. Last year, the Browns went 6-10 with Kitchens as their head coach.