The Giants recently hired former Cowboys head coach Jason Garrett as their new offensive coordinator, and another longtime Cowboy could be joining Garrett in the Meadowlands. Per ESPN’s Chris Mortensen, the Giants could look to sign tight end Jason Witten when free agency opens in March (Twitter link). 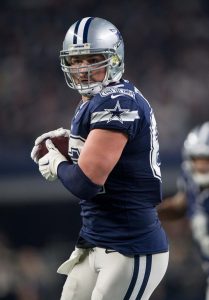 Witten has spent his entire career in Dallas, and after a one-year stint in the Monday Night Football broadcast booth in 2018, he rejoined the club in 2019. The 37-year-old showed he still has something left in the tank, posting 63 catches for 529 yards and four touchdowns.

Witten recently indicated that he is open to continuing his playing career in 2020, and the Giants could certainly use him. Although Big Blue will have Evan Engram at the top of its depth chart, it couldn’t hurt to have a reliable security blanket like Witten for second-year QB Daniel Jones.

Engram missed the second half of the 2019 season due to injury, and the Giants turned to sixth-round rookie Kaden Smith in his stead. Smith posted 31 catches for 268 yards and three scores, not bad for a rookie TE who was claimed off waivers in September, but perhaps not enough to preclude a one-year deal with Witten.

Garrett joined the Cowboys in 2007, so Witten played under him for 12 years. Dallas will almost certainly offer Witten a better chance than New York to capture a Super Bowl ring in 2020, so that consideration may trump his familiarity with, and respect for, Garrett. Indeed, Mortensen says there is no real clarity on Witten’s future at this point (Twitter link).