Eagles Looking To Move Alshon Jeffery, Who Would Welcome trade

Alshon Jeffery and the Eagles could be headed for a parting of ways. Philadelphia is looking to move their star receiver, sources told Connor Hughes of The Athletic. 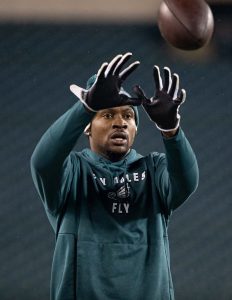 Hughes adds that Jeffery “would welcome the change of scenery,” but the receiver’s rep quickly refuted that. Jeffery “loves being in the city of Philly and playing for the Eagles,” his agent Tory Dandy tweeted. As Hughes points out, Jeffery’s contract is currently a significant hurdle. If the Eagles hadn’t restructured his contract back in September they would’ve been able to get out of his deal fairly easily, but now they’d be looking at a $26MM cap hit if they wanted to cut him.

There was a lot of drama surrounding Jeffery and the team last year, as he was alleged to have been the source of critical comments about Carson Wentz that surfaced in the press. Sources confirmed to Hughes that Wentz and Jeffery “never saw eye-to-eye and their relationship was testy.” Thanks to the restructure, Jeffery is guaranteed a base salary of $11.5MM for 2020.

Hughes thinks the Eagles will pursue a trade, and that they will look to split some of the money owed to Jeffery. The South Carolina product just turned 30 and is coming off Lisfranc surgery that could sideline him for most of training camp, so Hughes understandably thinks it will be hard to find a trade partner. Many seem to expect that the Eagles will eat the $26MM and cut Jeffery if they have to.

If that happens and Jeffery becomes a free agent, Hughes writes that it “shouldn’t take long before the Jets make a call.” Because of offset language in his contract, any team will be able to sign Jeffery for the league minimum should he reach the open market. Hughes notes that he has plenty of ties to the Jets’ current regime, as New York’s GM Joe Douglas spent time with him in Philly and Adam Gase coached him in Chicago. We should know a lot more about Jeffery’s situation, and where he’ll be playing in 2020, soon.

39 comments on “Eagles Looking To Move Alshon Jeffery, Who Would Welcome trade”