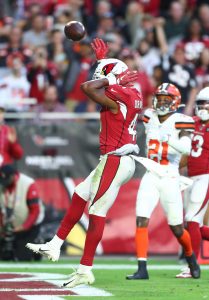 The Broncos believe that a reliable running back can help to keep defenses honest and, in turn, aid in the development of young quarterback Drew Lock, Klis writes. Henry is at the top of the shopping list for many RB-needy teams, though he’s expected to command a hefty asking price. He also might not reach the open market; the Titans are expected to cuff him with the franchise tag if they cannot work out a long-term deal, which would tender him at roughly $11MM for the coming season.

Drake, Gordon, and Carlos Hyde (Texans) may be in the mix, however. Between those veteran options and the draft, it’s likely that the Broncos will move to upgrade their RB room which currently leads with Royce Freeman and Philip Lindsay. Last year, the Broncos ranked 20th in the NFL with 103.9 rushing yards per contest.

As Klis notes, the Broncos met with a number of RB prospects at the combine late last month, including J.K. Dobbins, Cam Akers, Ke’Shawn Vaughn, and A.J. Dillon.