Although Melvin Gordon said as recently as late January he wanted to stay with the Chargers, it appears he will hit free agency. The expectation is the running back will be allowed to test the market, Josina Anderson of ESPN.com tweets. 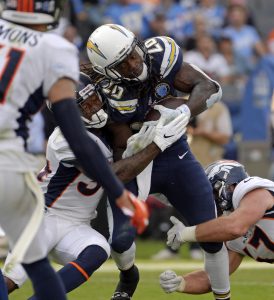 This does not exactly come as a big surprise, given Gordon’s history with the Bolts. The 2015 first-round pick held out into last season, and the Chargers broke off negotiations until 2020. Talks certainly do not appear to have gone in a positive direction, and the two-time Pro Bowler will be one of the bigger names on the market.

However, Gordon’s free agency trip comes at potentially bad time. Deals for the likes of David Johnson, Todd Gurley and Le’Veon Bell have not worked out for the respective teams. With the running back market in a stagnant place before those contracts were authorized, and the draft set to produce more cheap labor, it is not a great time to be a free agent at this position.

Gordon has averaged fewer than five yards per carry in four of his five seasons, and last year, current RFA Austin Ekeler outplayed him in the Bolts backfield. Gordon, though, totaled at least 1,375 yards from scrimmage from 2016-18 and scored 12 touchdowns in each of those seasons. He will generate interest. This proposed CBA could produce major salary cap spikes over the next few years, possibly enticing a running back-needy team to offer a nice contract come March.