Back in 2011, LeBron James considered taking his talents to…the Dallas–Fort Worth metroplex. And no, we’re not saying he considered playing alongside Dirk Nowitzki on the Dallas Mavericks. Rather, the NBA star flirted with the idea of joining the NFL, and he had at least one potential suitor in the Dallas Cowboys. 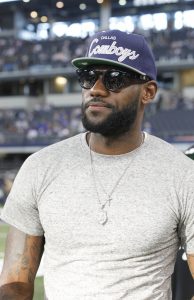 During an appearance on “Uninterrupted” yesterday, the future NBA Hall of Famer revealed that he considered switching to football during the 2011 NBA lockout (and the concurrent 2011 NFL lockout).

“I had no idea how long the lockout was going to be, and myself and my trainer … we really started to actually train to be a football player,” James said (via David Helman of DallasCowboys.com). “We started to clock our time in the 40, we started to add a little bit more to our bench presses and things of that nature.”

How serious did it get? Well, Maverick Carter, James’ friend and business partner, revealed that Cowboys owner/general manager Jerry Jones sent the basketball great a contract (which James subsequently framed). Considering LeBron’s star power, you’ve got to assume that the contract offer was legitimate; even if the MVP’s talents didn’t translate from the court to the gridiron, he undoubtedly would have been atop the list of jersey sales.

Of course, it’s not even that outlandish to suggest that James could have succeeded in the NFL. At 6-foot-9 and 250 pounds, James has the ideal body for a modern tight end. Plus, while we know we shouldn’t put too much stock into high school stats, LeBron hauled in 27 touchdowns in just two seasons while playing for St. Vincent-St. Mary.

As we all know, LeBron ended up sticking with basketball, which proved to be the right decision. Since the summer of 2011, the veteran has won three NBA championships and a pair of MVP awards. Still, it’s fun to wonder whether James could have helped guide the Cowboys to their first championship since 1995.

For the latest on LeBron, the Lakers, and all things NBA, follow Hoops Rumors on Twitter. (And, while you’re there, say hello to PFR editor emeritus Luke Adams!)