Shaquil Barrett wants a long-term deal, but, if that doesn’t materialize, he won’t drag things out. The Buccaneers edge rusher says he’ll sign his one-year tender if the two sides can’t agree to an extension before the July 15th deadline. 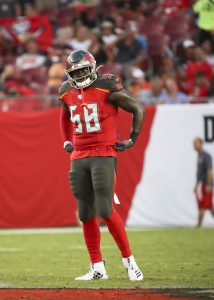 Last week, Barrett said he was about “50-50” on signing the one-year franchise tender and indicated that he would have an update on that front by Friday. Friday has come and gone, but Barrett now appears to be saying that he won’t hold out from the Bucs. Of course, signing the one-year tender today would not preclude the two sides from working out an extension before 7/15, so the delay is a bit of a head-scratcher given his comments. When asked about that, Barrett said the two sides are “still trying to work something out.”

That “something” could be a compromise on Barrett’s 2020 salary. It’s believed that Barrett was tagged as a linebacker, rather than a defensive end, so the one-year placeholder would pay him $15.8MM. Defensive ends, meanwhile, are marked at $17.8MM for the franchise tag this year. In the past, we’ve seen teams meet their edge rushers in the middle – a one-year, $16.8MM arrangement could be satisfactory for both sides if a longer deal doesn’t come together.

Last year, Barrett led the league with 19.5 sacks and registered 37 quarterback hits in total. No matter what happens in the coming days, Barrett says he’ll be aiming for a repeat in Tampa Bay. He’ll “most definitely” stay put in 2020, so Bucs fans can rest easy on that front.