One of the Browns’ top offseason additions may not suit up this season. The Browns are concerned that rookie safety Grant Delpit suffered an Achilles tear, Adam Schefter of ESPN.com tweets. 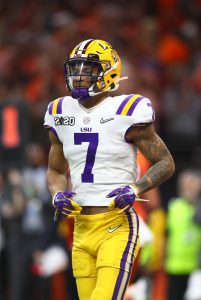 The LSU product needed to be carted off the practice field Monday, and the team confirmed he is being evaluated for an Achilles tear. Delpit will undergo an MRI Monday night, Ian Rapoport of NFL.com tweets.

The Browns used the No. 44 overall pick on Delpit, who was long expected to be a first-round pick. He, Denzel Ward and ex-LSU teammate Greedy Williams represent the three young pillars of Cleveland’s secondary. Delpit was productive throughout his three-year college career. He registered 199 tackles (17.5 for loss) and seven sacks and was on track to be an instant contributor as a pro.

Were Delpit to have torn one of his Achilles’ tendons, the Browns’ offseason addition of Andrew Sendejo will be pivotal. While Cleveland signed Karl Joseph, Sendejo would be in line to ascend from top backup to a starting role. The former Vikings starter has operated in that capacity often in his 10-year career, starting 61 games. He was a full-time starter alongside Harrison Smith from 2015-17, and the Vikes featured top-six scoring defenses in each campaign. The 2020 season will be Sendejo’s age-33 slate, however.