Allen Robinson isn’t the only Bears player who could receive a contract extension. NFL Network’s Mike Garafolo reports (via Twitter) that Tarik Cohen could ink an extension “in the near future.” NFL.com’s Ian Rapoport echoes that report (on Twitter), noting that the two sides had had “fruitful discussions” and “there is a push to get it done today in advance of Week 2.” 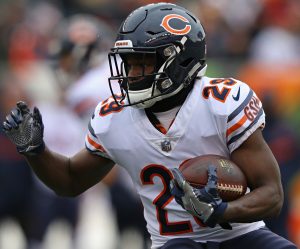 Cohen is in the final year of his four-year rookie deal, and he’s currently earning a $2.1MM base salary. The 25-year-old has had a consistent role for the Bears since being selected in the fourth round of the 2017 draft. He earned a Pro Bowl nod in 2018 after finishing with 1,169 all-purpose yards and eight offensive touchdowns. While he set a career-high with 79 receptions in 2019, he finished with a career-low 669 all-purpose yards.

It’s always tough to gauge the value of pass-catching running backs. Chris Thompson earned around $3.5MM per year when he inked his extension with Washington, and James White signed a three-year, $12MM deal with the Patriots back in 2017 (although $3MM of that money was incentive-based). Neither of those players have a Pro Bowl appearance on their resume, so Cohen could expect at least something in that range.

Despite reports of a trade request from earlier this week, it sounds like Robinson may also be sticking around Chicago. We heard this morning that the two sides have resumed extension talks.