Washington may have to look elsewhere to help fill the void created by Landon Collins‘ season-ending injury. A Ron Rivera–Eric Reid reunion is on hold for the time being. 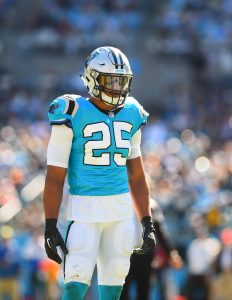 Several veteran players who would have looked strange on practice squads prior to this unusual season have signed such agreements this year, only to make belated appearances on 53-man rosters. Reid may be eyeing a more direct path back to action.

A seven-year veteran who played most of the past two seasons with the Panthers, Reid has experience with in-season signings as well. The Panthers signed him to their active roster in 2018, and the former 49ers first-round pick started 13 games that season. Carolina then gave the outspoken safety an extension, but upon changing coaching staffs this offseason, the Panthers released Reid.

Washington is shorthanded at safety, however. The team gave Collins a then-record $14MM-per-year deal in 2019. That changed a safety market that curiously cratered in 2018, when Reid and multiple other proven starters struggled to land jobs throughout the offseason. Troy Apke and backups Deshazor Everett and Kamren Curl — a rookie seventh-rounder — reside as the other safeties on Washington’s active roster.

Washington is making a move at safety, however, albeit a lower-profile transaction. The team is promoting Jeremy Reaves from its practice squad.