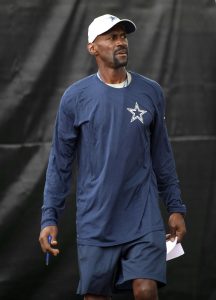 Paul died surrounded by family at a Dallas-area hospital; the cause of death has not been revealed. The Cowboys hired Paul in 2018, but the former NFL defender had been an assistant in the league since the late 1990s. The Cowboys canceled their Tuesday practice after Paul’s hospitalization.

“The loss of a family member is a tragedy, and Markus Paul was a loved and valued member of our family,” Jerry Jones said in a statement. “He was a pleasant and calming influence in our strength room and throughout The Star. His passion for his work and his enthusiasm for life earned him great respect and admiration from all our players and the entire organization. Our hearts are broken for his family and all of the individuals whose lives he touched and made better.”

A standout safety at Syracuse in the late 1980s, Paul intercepted 19 passes with the Orangemen and went on play five seasons with the Bears and Buccaneers. Chicago drafted Paul in the 1989 fourth round and used him as a part-time starter on Mike Ditka‘s final Bears defenses.

As a coach, Paul achieved great success. He collected five Super Bowl rings — three as a member of the Patriots and two with the Giants — in 23 years as an NFL strength coach. Paul spent five seasons with the Patriots, coming aboard when Bill Belichick began his tenure in 2000. After two years with the Jets, Paul stayed in New York and worked as the Giants’ assistant strength and conditioning coach throughout Jerry Reese‘s near-12-year GM tenure. The Cowboys hired Paul as their assistant strength coach in 2018 and promoted him earlier this year.