Former Chiefs and Browns general manager John Dorsey has been “quietly” working for the Eagles over the past few months, reports Mike Garafolo of NFL Network (via Twitter). The 60-year-old has been serving as a consultant for general manager Howie Roseman. 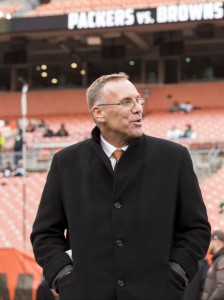 According to Garafolo, the Eagles have been focused on strengthening their “talent evaluation,” especially following the departures of Joe Douglas (Jets) and Andrew Berry (Browns). Dorsey is thought of “extremely highly inside that building,” and he could potentially stick around for a full-time role in 2021.

Of course, Dorsey would probably prefer a GM gig, and there have been some rumblings that he could be a candidate for potential openings. Earlier this month, we heard that the Texans were planning to interview the executive for their GM vacancy.

Dorsey has been chased out of both Kansas City and Cleveland, but he’s also a big reason why both of those teams are currently successful. For the Chiefs, Dorsey was responsible for drafting MVP quarterback Patrick Mahomes, wideout Tyreek Hill, and tight end Travis Kelce. While the Browns struggled during their first two seasons with Baker Mayfield at the helm, the team has taken a step forward this year. Dorsey’s other acquisitions and selections, including cornerback Denzel Ward, running backs Nick Chubb, and defensive notables Sheldon Richardson and Olivier Vernon, have also played major roles this season.

12 comments on “John Dorsey Working As Consultant For Eagles”