Asked to play a key role after Odell Beckham Jr.‘s injury, Rashard Higgins is again on the free agency precipice. The five-year veteran will hit the market March 17, should the Browns not extend him by then. 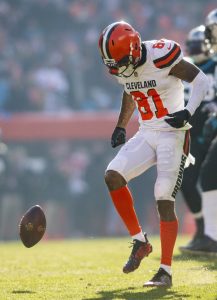 But Higgins would like to stay in Cleveland, and Mary Kay Cabot of cleveland.com notes the Browns would like him to bring him back — at a price. The Browns and Higgins discussed an extension in December, but nearly three months after news of those talks surfaced, the veteran wideout told Cabot no offer has emerged.

“We want to see when we can get this contract and stuff done,’’ Higgins said during an appearance on ESPN 850 Friday. “Obviously if it’s not with the Browns — we want it to be with the Browns — but it’s up in the air right now.”

Higgins re-signed with the Browns on a one-year deal worth just $910K during the 2020 offseason. He then posted career-high marks in receiving yards (599) and yards per catch (16.2). Higgins has two 500-yard seasons under his belt since Baker Mayfield arrived.

The Browns have Beckham and Jarvis Landry under contract for 2021. Landry and Beckham are set to count more than $30MM combined against Cleveland’s 2021 cap, so a Higgins deal — assuming Beckham remains on the Browns after being linked to trades in previous years and having seen his production dip after being dealt to the team — would mean a considerable commitment to the wide receiver position. The Browns drafted Donovan Peoples-Jones last year and have KhaDarel Hodge set for restricted free agency.

Higgins, 26, joined the Browns as a 2016 fifth-round pick. GM Andrew Berry was with the franchise when Higgins was drafted and oversaw the decision to re-sign him last year. Hitting the market this year might not be ideal for the auxiliary wideout, considering numerous starter-caliber receivers will be free agents — of the UFA and SFA varieties — and teams will have less money to spend because of the reduced cap.