John Johnson Turned Down More Money To Sign With Browns

The Browns added a big piece to their defense when they signed safety John Johnson last week, and they apparently faced steep competition for his services. 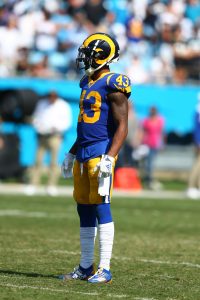 Johnson turned down “significantly more money” from another team to sign with the Browns, his agents told Mary Kay Cabot of Cleveland.com. He was clearly very excited about the prospect of playing for this upstart Browns team that is coming off their best season in decades. It’s a sign of how much the times have changed that players are now taking less money in order to sign with the Browns as a destination in free agency.

Imagine if someone had told you that a few years ago. Johnson signed a three-year, $33.75MM pact with the Browns that included $24MM guaranteed, and was arguably the top safety on the market after guys like Justin Simmons, Marcus Maye, and Marcus Williams all got franchise tagged by their respective teams.

Johnson’s AAV of $11.25MM has him as the eighth-highest paid safety in the NFL currently. Shortly before he signed with Cleveland we heard the Lions, Eagles, and Jaguars were pursuing him, so it’s possible it was one of those teams that offered him the bigger contract.

The Rams opted not to tag him for financial reasons, but Johnson has been a really good player since entering the league as a third-round pick in 2017. He played every snap for a Los Angeles defense that was best in the league last season, and won’t turn 26 until December. Johnson will start next to either 2020 second-round pick Grant Delpit or Ronnie Harrison in 2021.