Preston Smith will be back for a third Packers season. The sides agreed on a reworked deal Friday, according to Tom Silverstein of the Milwaukee Journal Sentinel (on Twitter). 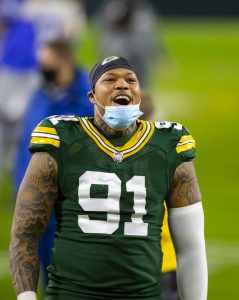 The veteran edge rusher will now be attached to a $1MM base salary in 2021, Ian Rapoport of NFL.com tweets, adding that much of Smith’s 2021 money will be converted into a signing bonus. That will cover $6.5MM, with Rapoport adding that there will be $4.4MM available via sack-based incentives.

As for the sack thresholds, Rapoport tweets Smith will need to reach six to trigger the minimum escalator ($500K). There are $750K bumps at the eight- and 10-sack marks, with the $1MM-plus incentives tied to 12 and 14 sacks. Smith has only eclipsed eight sacks once in six seasons.

Friday’s changes will reduce Smith’s cap number — previously at $16MM for ’21 — considerably while slashing his earnings somewhat. But the six-year veteran previously loomed as a cap-casualty candidate. The Packers will save $7.25MM by reworking Smith’s deal, per the Green Bay Press-Gazette’s Pete Dougherty (on Twitter); they would have saved $8MM by cutting Smith.

One of the Packers’ two big-ticket 2019 edge signees, Smith took a step back last season. After registering 12 sacks in his first Packers slate, the ex-Washington linebacker ended the 2020 campaign with just four sacks and 11 QB hits. He also lost his starting spot to Rashan Gary for a time. But Gary and both Smiths — Preston and Za’Darius — are due back for a third season together.