On Monday, Bears GM Ryan Pace anointed Andy Dalton as his starting quarterback for 2021 (Twitter link via ESPN.com’s Jeff Dickerson). Dalton, who inked a one-year deal with Chicago earlier this year, is years removed from his best work. Still, Pace believes that Dalton can turn things around for the Bears, who have turned in two straight .500 seasons. 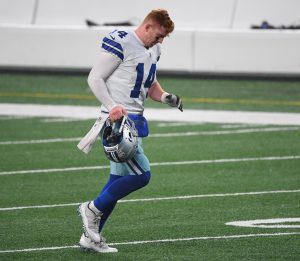 Dalton’s one-year, $10MM deal was a solid indicator that he’d be starting, or at least considered for the starting role. Still, it wasn’t the splashiest choice for a team that watched Mitchell Trubisky decline over the last couple of years. For what it’s worth — the 49ers and Broncos were keenly interested in Dalton, so the Bears aren’t the only club that believes in the 33-year-old.

Both Pace and head coach Matt Nagy are on the hot seat, so there’s a lot riding on Dalton’s arm. For now, he’s slated to be backstopped by Nick Foles, though no one would be surprised to see him traded in the coming months.

Dalton enjoyed success during his run as the Bengals’ starter, earning three Pro Bowl nods and five straight postseason berths. But, after his tenure from 2011-19, the Bengals let him walk. After Dak Prescott‘s season-ending injury, he took over under center for the Cowboys. In eleven games and nine starts, the veteran finished with 14 touchdowns against eight interceptions while averaging 6.5 yards per attempt.