49ers Were Preparing To Trade For DaeSean Hamilton

Had DaeSean Hamilton not suffered a torn ACL while training Friday morning, he was set to be traded to the NFC West. The 49ers were the team negotiating a deal for the fourth-year wideout, Troy Renck of Denver7 reports (on Twitter). 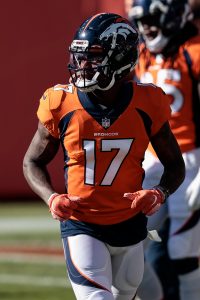 Plenty has transpired since those talks heated up, with Hamilton’s knee injury scuttling that trade. This would have been the second trade between the Broncos and 49ers involving a wide receiver in the past 19 months; Denver sent Emmanuel Sanders to San Francisco at the 2019 trade deadline.

The Broncos have since waived Hamilton with an NFI designation. The former fourth-round pick was working out away from the team’s facility. The 49ers will have the opportunity to claim the former Penn State pass catcher, but he is set to miss the 2021 season. Hamilton’s rookie contract expires after the 2021 season as well.

The 49ers ran into some notable injury trouble last year. Both Deebo Samuel and Brandon Aiyuk missed time, while former third-round pick Jalen Hurd has missed two full seasons. Slot receiver Trent Taylor battled extensive injury trouble; he has since signed with the Bengals. Hamilton primarily played in the slot for the Broncos but could not establish himself as a consistent target, leading the team to draft two wideouts high in 2020.

San Francisco did not draft a receiver this year, though Kyle Shanahan did opt to reunite with Mohamed Sanu. Ex-Hamilton Broncos teammate River Cracraft also remains on the 49ers’ roster.

4 comments on “49ers Were Preparing To Trade For DaeSean Hamilton”