Earlier this month, we heard that the Dolphins had contact with free agent right tackles like Alejandro Villanueva and Ricky Wagner prior to the draft, with the idea that 2020 RT Robert Hunt could shift inside to right guard. Though Miami did not sign one of those players, the club did draft Notre Dame OT Liam Eichenberg, who is believed to be a better fit on the right side of the line despite serving primarily as a left tackle for the Fighting Irish. So as Barry Jackson of the Miami Herald writes, the Dolphins are officially moving Hunt to right guard. 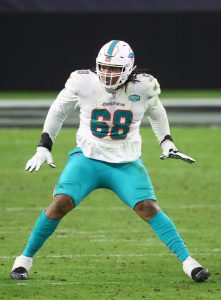 Miami believes Hunt, a 2020 second-round draft choice, can be a Pro Bowl-caliber guard. He did not perform particularly well at right tackle in his rookie campaign, grading out as a below-average player per Pro Football Focus’ advanced metrics. Though he showed noticeable improvement down the stretch, the Fins believe that a permanent move to the interior will be in their best interests. Jackson says Hunt has no issue with the position switch.

The Louisiana product did play guard as an underclassmen, but he spent his junior and senior seasons at right tackle. Given the team’s views of his ceiling as a guard, he would appear to be the odds-on favorite to open the season as the starting RG, though there are several other players on the roster — like Jesse Davis and 2020 fourth-rounder Solomon Kindley — who could be considered for the role.

With Eichenberg, Hunt, Kindley, 2020 first-rounder Austin Jackson, and 2019 third-rounder Michael Deiter, the Dolphins have a high-upside but generally unproven group blocking for sophomore passer Tua Tagovailoa. The team did add veteran center Matt Skura and tackle D.J. Fluker this offseason, but for the Dolphins to take the next step, they will need their significant draft investments into the O-line to start paying dividends.

2 comments on “Dolphins To Move Robert Hunt To RG”