Despite landing a one-year deal in free agency for a third straight offseason, Kevin Johnson will opt to step away from football. The Titans cornerback is retiring, according to the team. 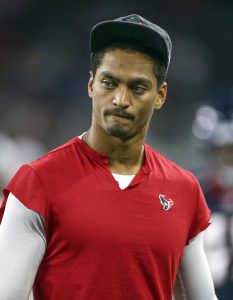 Tennessee signed Johnson in March, giving him a one-year deal worth $2.25MM. The 28-year-old cornerback will wrap his career after six seasons. Injuries, unfortunately, played a significant part in the former first-round pick’s NFL run.

The Texans selected Johnson 16th overall in 2015 out of Wake Forest. He started 10 games as a rookie but was unable to stay on the field in subsequent years, shortening his time in Houston. Though Johnson bounced back to carve out roles in Buffalo and Cleveland, he will finish his career with one interception.

A broken foot began Johnson’s rough luck in 2016, limiting him to six games in his second season. In 2017, a sprained MCL cost him time. While Johnson played 12 games that season, he suited up for just one in 2018 after a severe concussion sidelined him that September. The Titans cut him in 2019, backtracking on a fifth-year option commitment it made the previous spring.

Johnson played out one-year deals with the Bills and Browns the past two seasons. Working as a depth piece for the two rising teams, the 6-foot defender helped both to the playoffs. However, Johnson was part of a Browns COVID-19 outbreak late last season. As a result, Cleveland’s primary slot corner was not on the field for the franchise’s first playoff win in 26 years.

Since signing Johnson, the Titans used first- and third-round picks on corners — Caleb Farley and Elijah Molden. Tennessee invested a second-round pick in Kristian Fulton last year and also signed Janoris Jenkins this March. The Titans’ new-look cornerback contingent will not include Johnson, but the team has been active in adding cover men over the past two offseasons.