We haven’t heard much about Trai Turner lately, but he told SiriusXM (Twitter link) that he’ll “make a splash sooner [rather] than later.” Meanwhile, the free agent says that he’s now fully healthy following a year of maladies. 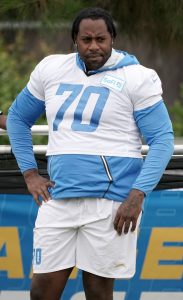 “Last year was a rough season for me with injuries and just [COVID-19] overall. You go through things and situations arise, but you work through it and you get through it,” Turner said. “So, I’m feeling good. I’m just ready to come back and have a phenomenal season.”

Turner met with the Steelers recently, his only known visit of the offseason. The five-time Pro Bowler has been on the market since March, when the Bolts released him to save ~$11MM against the salary cap. Now, he stands as one of the very best free agents on the board.

Turner, 28, mounted a Pro Bowl streak from 2015-19. But, last year, he was limited to just to nine games. All in all, the former Panthers third-round pick has 89 career starts to his credit. He may be a good fit for the Steelers, though there are other teams with more dire needs at guard. As it stands, those spots are manned by All-Pro David DeCastro and promising youngster Kevin Dotson.