For the first time in nearly a year, Greedy Williams was a full practice participant. The Browns began their 11-on-11 drills without Williams on Tuesday. A day later, the former second-round pick was full-go, Nate Ulrich of the Akron Beacon Journal notes. 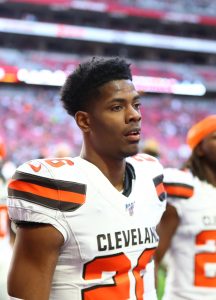 The third-year cornerback is officially off the Browns’ active/PUP list and will attempt to return to Cleveland’s starting lineup. A shoulder nerve issue sidelined Williams during training camp last year — on the same day ex-Williams LSU teammate Grant Delpit suffered a ruptured Achilles’ tendon — and he went on IR in October. Neither Williams nor Delpit played last season.

The Browns have eased Delpit back into action, but Williams can begin making a legitimate attempt to recapture his starting job. A second-round pick during John Dorsey‘s GM regime, Williams started 12 games as a rookie. While Williams will face stiffer competition for a first-string job this year, he lined up with the Browns’ starting defense during OTAs and was back in that role Wednesday

After using stopgap solutions alongside Denzel Ward in 2020, the Browns were active in bolstering their cornerback group this offseason. Cleveland signed Troy Hill and drafted Greg Newsome in the first round. Williams’ return gives the team interesting depth. The Browns have made extensive outside investments on defense this year, after ranking 25th in DVOA on that side of the ball last season. But the returns of Williams and Delpit also stand to strengthen the unit.