We heard yesterday that Ravens rookie receiver Rashod Bateman was going to miss some time, and now we have a bit more info. For starters, the thought is that Bateman has a “significant groin pull,” Jason La Canfora of CBS Sports tweets. 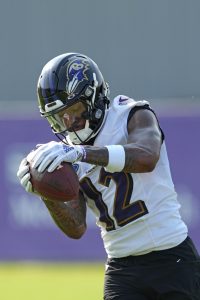 Baltimore head coach John Harbaugh then announced Wednesday that his young wideout would miss “a number of weeks,” although he did declare “it’s not going to be months.” When asked if Bateman would be ready for Week 1 Harbaugh said he was “hopeful,” but didn’t sound overly optimistic.

At this point it seems like Bateman missing some regular season time is a distinct possibility. It’s a tough blow for a Ravens offense that has caught a lot of flak for not equipping Lamar Jackson with the best weapons in the passing game. The drafting of Bateman 27th overall back in April was supposed to go a long way toward solving those issues.

Bateman had missed a few practices earlier in camp with a groin issue, so it sounds like this latest injury was an aggravation of that. The Ravens also added Sammy Watkins this offseason, and of course still have Marquise Brown (also dinged up with a hamstring injury) on the depth chart.

We’ll keep you posted when we hear more about Bateman’s status. The Minnesota product had 1,219 yards and 11 touchdowns in 2019, his last full college season.