Josh Gordon‘s quest to return to the NFL took a positive turn today. The NFLPA determined that the embattled wideout “successfully completed his NFL-monitored treatment program,” tweets ESPN’s Adam Schefter. As a result, the NFLPA has recommended to the NFL that Gordon be reinstated. 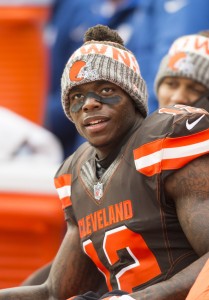 Gordon was a first-team All-Pro in 2013 when he led the league in receiving yards with 1,646 in only 14 games, but things quickly unraveled after that. He’s been suspended numerous times, and last played in 2019 when he appeared in six games with New England and five with Seattle. Gordon’s most recent reinstatement was rescinded in February, making him once again suspended indefinitely. He was then released by the Seahawks in early March.

The NFL was reportedly giving the 30-year-old random drug tests for the past three months, and Gordon was “said to have passed all tests.” The NFLPA has corroborated that report, and now the league’s commissioner controls the fate of Gordon’s NFL future.