Cam Newton is eager to make his comeback. “Hell yeah, I still want to play football,” the free agent quarterback said in a YouTube video. 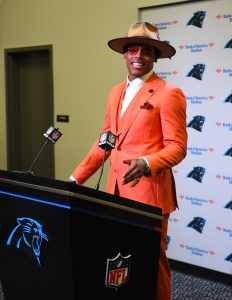 Newton also disclosed that he’s been vaccinated for COVID-19, which may improve his odds of finding a deal. The 32-year-old said he was “absolutely” surprised by the Patriots’ decision to cut him over the summer and felt that he would have stayed on the roster had he not been asked to spend five days away from the team facility. For what it’s worth, Newton said he would have agreed to stay on as Mac Jones‘ backup.

Although Newton has never been an NFL backup, he struggled in 2020 and signed for backup-level money earlier this year. The former MVP ranked 29th in cumulative QBR from 2016-19 as well, so it’s probably QB2-or-bust for Newton, unless an injury leaves a team especially desperate. Meanwhile, no clubs have been linked to Newton over the past six weeks.

The former No. 1 overall pick tested positive for COVID-19 in 2020 and missed one start. Still, he logged his number of starts since the 2017 season. After injuries cut his 2018 and ’19 seasons short, Newton showed he could stay healthy.