Placed on IR last weekend, Pernell McPhee will be sidelined for at least two more Ravens games. But the team did not shut him down merely for rest purposes. McPhee is recovering from knee surgery, Jeff Zrebiec of The Athletic notes (subscription required). 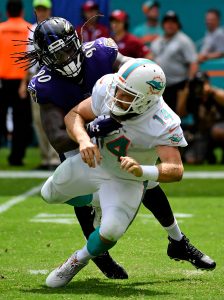 McPhee’s latest knee operation was arthroscopic in nature, giving him a chance to return later this season. The Ravens are indeed hoping they will have him back at some point in December, Zrebiec adds.

Knee procedures are not uncommon for the 11-year veteran. Over the course of his career, McPhee has seen both knees go under the knife for injuries in different years. Before this most recent procedure, he had last seen his knee worked on just before the start of the 2017 season in what was described as a cleanup surgery.

The Ravens re-signed McPhee to a one-year deal just before the start of the season, following a 2020 slate in which he started 13 games and was third on the team with three sacks. The 11th-year veteran returned to the team that drafted him in 2019 after injury-riddled stints in Chicago and Washington.

McPhee’s 2021 campaign has been somewhat quiet. He has tallied just one sack and 14 tackles in nine games this year. But the rotational rusher stands to have a chance to contribute more to the Ravens’ latest playoff push.