The Panthers will get a major boost on their defense when they take on the Saints tomorrow. Brian Burns and Shaq Thompson have cleared COVID-19 protocols and will play in New Orleans on Sunday, reports NFL Network’s Ian Rapoport (via Twitter). 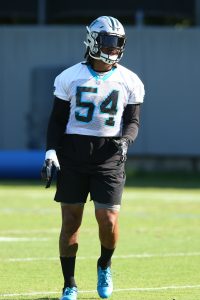 The two players were among a handful of Panthers players who landed on the reserve/COVID-19 list on Monday, putting their availability for Sunday in doubt. While Burns and Thompson will play, the Panthers will still likely be without a handful of notable defensive players, including linebacker Haason Reddick.

Thompson, a former first-round pick, has spent his entire career with the Panthers, including 2019 and 2020 campaigns where he combined for 223 tackles. He’s had another productive season in 2021, collecting 91 tackles, two sacks, and two interceptions. The 27-year-old still has two-plus years remaining on the four-year, $54MM extension he inked with Carolina in 2019.