The Browns are starting to carve out some extra cap space. Per ESPN’s Field Yates (via Twitter), the Browns have reworked the final year of offensive lineman Jack Conklin‘s contract. 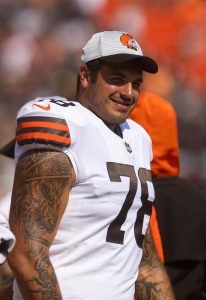 Now, Conklin will be locked in for 2022, he can still earn up to the $12MM he was due, and the Browns save $4MM in cap space. The Browns already entered the offseason with plenty of breathing room under the cap, with ESPN’s Jake Trotter citing their projected cap space at $27.32MM.

Following a four-year stint with the Titans that had both highs (like earning All-Pro honors as a rookie) and lows (like having his fifth-year option declined), Conklin joined the Browns in 2020. He started all 15 of his games in 2020 and earned another All-Pro nod, but he was limited to only seven starts in 2021 after suffering a torn patellar tendon.