Linked to either Aidan Hutchinson or an offensive tackle at No. 1 overall, the Jaguars appear to have identified a sleeper for the honor of being the draft’s first player selected. 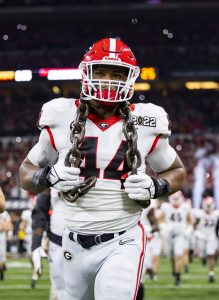 Buzz is building on Travon Walker, per ProFootballNetwork.com’s Tony Pauline, who adds the Jaguars have identified the Georgia defensive end as a player they could select with the first pick. The Jags will use one of their allotted 30 prospect visits for a Walker meeting.

Walker tested well at the Combine, posting a 4.51-second 40-yard dash despite his 272-pound frame. This bettered Hutchinson’s 4.74 clocking. Hutchinson (260 pounds) bettered Walker in the 20-yard shuttle and three-cone drills. The Michigan product also is coming off a dominant senior season, registering 14 sacks and forcing two fumbles, finishing second in the Heisman voting. Used as less of a pure edge compared to Hutchinson, Walker recorded six sacks as a junior to help the Bulldogs to their first national championship since 1980.

ESPN’s Scouts Inc. ranks Hutchinson as this draft’s top prospect, slotting Walker eighth. Mel Kiper Jr.’s latest mock draft sends Hutchinson to Jacksonville and Walker to Carolina at No. 6, though NFL.com’s Daniel Jeremiah moved Walker to the No. 2 overall pick. The Jags are “widely expected” to draft Hutchinson, ESPN.com’s Matt Miller adds, but Walker has at least crept into the equation.

26 comments on “Jaguars Considering DE Travon Walker At No. 1 Overall”