In addition to his role on numerous fantasy championship teams, Rashaad Penny is very much in his actual team’s plans. The former first-round pick’s late-season surge has him on the Seahawks’ long-term radar. 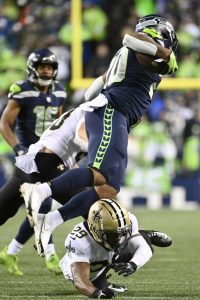 The Seahawks are interested in re-signing Penny, and Pete Carroll said the four-year veteran would also like to stay in Seattle, Mike Garafolo of NFL.com tweets. Penny’s career trajectory would make these extension talks a bit unusual, but he delivered top-shelf work for the Seahawks down the stretch. That finish puts Penny on the radar to be Seattle’s back of the future — the team’s hope when it made him a surprise Round 1 choice four years ago — especially with Chris Carson coming off neck surgery.

Although Penny missed more time due to injury, he returned to start the Seahawks’ final five games. The San Diego State product’s 7.3-yard average in that span gave him an NFL-leading 6.3 for the season (albeit on just 119 carries) and 749 rushing yards. The 119 carries, however, were a career-high total. Penny was never able to supplant Carson when both were healthy and missed most of the 2020 season after an ACL tear late in the 2019 slate. Penny dealt with calf and hamstring injuries in 2021.

Penny, 26, has missed 31 career games, counting three playoff contests. There still figures to be a “prove it” component to his next contract. The Seahawks did not pick up his fifth-year option in 2020. Penny joins the likes of James Conner, Melvin Gordon, Leonard Fournette, Sony Michel, Marlon Mack and Raheem Mostert as a back on track for free agency.

The Seahawks kept Carson on a two-year, $10.4MM deal last March, but the veteran starter suffered a significant neck injury that limited him to four games. Carson, 27, underwent neck surgery late last year. Due to the void year the Seahawks tacked onto his deal, it would cost the team $3MM-plus in dead money to release the five-year starter.

One comment on “Mutual Interest Between Seahawks, Rashaad Penny”