As the draft draws closer, many continue to believe the Jaguars will use the No. 1 pick on an edge rusher. While there are a pair of offensive line prospects who could also be in consideration, the presence of left tackle Cam Robinson could turn their attention away from the likes of Evan Neal or Ikem Ekwonu. 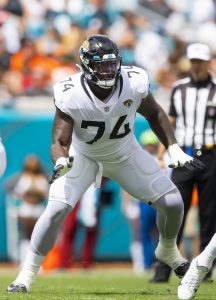 Pro Football Network’s Tony Pauline reports that “the Jags are close to signing [Robinson] to a long-term extension”. The 26-year-old was franchise tagged for the second time last month, guaranteeing that he would be in Jacksonville for at least the 2022 campaign. He has started all 61 games he has played in across five seasons in Duval County.

His level of play during that span, however, left many believing the tag would be a short-term move to buy time for a replacement. His 67.4 PFF grade in 2021 ranked 48th out of 83 qualifying tackles, far lower than where his compensation ranks at the position. The $16.6MM value of the tag would put him in a tie for eighth in terms of left tackle salaries, if he were to remain unsigned beyond 2022.

Pauline further states that “an announcement could come soon” regarding a new deal for Robinson. If that were to happen, it would give the team more certainty along an offensive line which has added All-Pro guard Brandon Scherff this offseason. It would also increase the chances of either Aidan Hutchinson or Travon Walker hearing their name called first on Thursday even further.