The first of the Jets’ draft picks is under contract, with the team leading off its 2022 round of pick signings by inking Sauce Gardner to his four-year rookie accord Saturday. 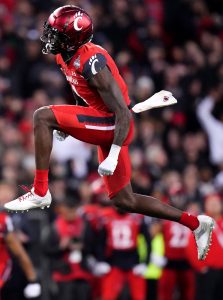 Gardner’s deal includes the customary fifth-year option, giving the Jets a half-decade to determine his path. Gardner living up to his draft slot would mean a monster extension one day, and Gang Green would likely be fine with this outcome. For at least three seasons, however, Gardner will be tied to his rookie contract. Gardner’s four-year deal is worth a fully guaranteed $38.7MM, Rich Cimini of ESPN.com tweets.

The team has swung and missed on a few cornerbacks in recent years — from its second Darrelle Revis contract to Trumaine Johnson‘s deal — and largely opted against notable investments at the position under GM Joe Douglas. That changed this year, when the team used the No. 4 overall pick on Gardner, who did not allow a touchdown while in coverage at Cincinnati. Gardner was a key reason Cincinnati broke the Group of Five barrier by earning a College Football Playoff slot, leading a brigade of Bearcats in being drafted last week. Gardner, 21, intercepted nine passes during his three-year career at the American Athletic Conference school.

New York’s Gardner pick ran counter to the way Robert Saleh‘s defenses were staffed in San Francisco and how Seattle fills its cornerback posts, with each team preferring to bet on mid- or lower-level corner investments rather than use top draft capital on the position. But the Jets ranked last defensively in both yards and points allowed in Saleh’s debut. They have both added Gardner in the draft and signed ex-49er and Seahawk D.J. Reed to address the previously understaffed position.