There is another update to Deshaun Watson‘s ongoing legal situation, but not one further signalling its conclusion. Another civil suit has been filed against him, per ESPN’s Sarah Barshop (Twitter link). 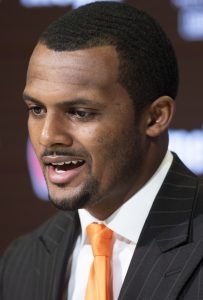 That brings the total number of suits to 23. As this latest one states, the plaintiff “changed her mind about filing a lawsuit after watching the HBO Real Sports piece”. That is a reference to the recent airing of two plaintiffs who went public with the details of their allegations against the Browns quarterback, who has at all times maintained both his innocence and an intention of seeing out the legal process without a settlement agreement. Nicki Jhabvala of the Washington Post details (on Twitter) that this suit contains specific allegations that the owner of one spa in particular “provided women for Watson” and that they were paid for doing so.

As his attorney, Rusty Hardin, admitted after the HBO piece aired, Watson and his camp were “not going to win the battle of public opinion” on the matter of sexual misconduct and sexual assault allegations made against him related to massage therapy sessions. Hardin stated that he envisioned the NFL’s investigation ending by June or July after it came out that the league would be meeting with the 26-year-old for a second time.

This newest suit could, of course, affect that timeline. If the league meets with the 23rd plaintiff – as it has with more than half of Watson’s accusers – that would open the door to a delay in their ultimate decision with respect to a punishment, which is separate from the result of his pending civil litigation (on two previous occasions, grand juries have decided not to indict him on criminal charges). While it remains to be seen how much of an effect, if any, the suit will have on this matter, it adds another layer to the most controversial storyline in the league this offseason.