3:29pm: Barring an indefinite suspension that takes Watson off the field immediately, the Browns announced they do plan to start their big-ticket acquisition Friday.

With Robinson determining Watson violated the policy, the NFL appealed. The league’s appeal is expected to produce a much longer ban than six games. One league source called it a “slam dunk” Harvey will enforce the league’s preferred one-year ban, Aaron Wilson of ProFootballNetwork.com notes, and others would be surprised if the sixth-year QB’s ban is not significantly lengthened. 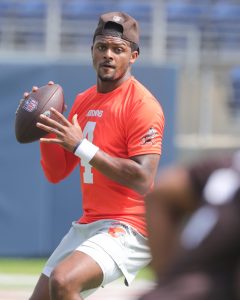 “We’ve seen the evidence,” Goodell said, via ESPN.com’s Jeff Legwold. “[Robinson] was very clear about the evidence, should we enforce the evidence. That there was multiple violations here, and they were egregious, and it was predatory behavior.”

The league is trying to move on this appeal ruling before the Browns begin their preseason slate, per Mike Florio of Pro Football Talk, who tweets the NFL has indeed asked for an indefinite suspension that keeps the controversial QB off the field for Cleveland’s preseason as well. The NFLPA said a ruling Friday could indeed shelve Watson for the Browns’ preseason opener against the Jaguars.

Preseason competition is not exactly consequential in this grand scheme, but the league would avoid additional PR backlash by keeping Watson sidelined before his suspension starts. If a suspension does not prevent it, the Browns would like to give Watson some game action Friday, cleveland.com’s Mary Kay Cabot tweets.

Watson, who has not taken the field since Week 17 of the 2020 season, cannot return to action until at least Week 7 of this season. The NFLPA not appealing Robinson’s decision takes Watson off the field for the Browns’ first six games. This matter becoming a courtroom drama — which is the expectation — would only affect Watson’s availability for Week 7 and beyond.

The sides have discussed a settlement off and on for several weeks, but Peter King of NBC Sports adds a resolution between the NFL and NFLPA before Harvey’s ruling is unlikely. A union move to settle would make more sense at this point, with the league having a clear opportunity to see its long-held hope — a 17-game ban — come to fruition via Harvey. Absent a full-season suspension, the NFL has sought a heavy fine — in the $8MM range — that helps account for the wildly unpopular contract the Browns authorized.

The contract structure has not only irked the NFL, but King adds the deal, which dropped Watson’s 2022 base salary to the league minimum to protect him against a suspension, has not sat well with the other 31 teams as well. Multiple owners also expressed to ESPN.com’s Ed Werder that Robinson’s ruling was too light (Twitter link). If Harvey’s suspension sidelines Watson throughout the 2022 season, his contract tolls to 2023. The QB’s deal would, then, run from 2023-27. Watson playing in 2022 keeps him signed through 2026.

100 comments on “Significant Ban Expected For Browns’ Deshaun Watson On Appeal; NFL Trying To Keep QB Off Field In Preseason”