The Bills will once again be on primetime in Week 2, but they will be missing a key member of their defensive front on Monday night. Per a team announcement, defensive tackle Ed Oliver has been ruled out. 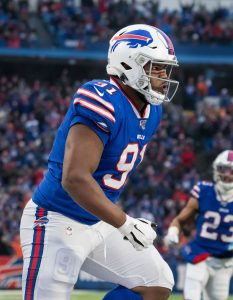 The 2019 first-rounder took on a starting role midway through his rookie campaign. Since then, he has been a steady presence on the Bills’ d-line, appearing in every contest so far in his career. With 12 sacks, he has shown the pass-rush ability which made him a top-10 pick in addition to his work against the run.

The latter skillset has been poorly graded by PFF, but Buffalo still generated little surprise when they decided to pick up his fifth-year option. As a result, Oliver will make $10.75MM in 2023 while the Bills look to keep their young, championship-caliber core intact.

While it remains to be seen how long the 24-year-old will be out, the fact that he will be absent against the Titans could prove significant. Derrick Henry represents the obvious focal point of Tennessee’s offense, especially since they traded away A.J. Brown in the offseason. The All-Pro running back ran for 82 yards in the team’s Week 1 loss to the Giants, but has shown himself capable of much more when healthy.

The Bills, meanwhile, put up the best defensive performance against the run during their win over the Rams last week. The defending champions were held to just 52 yards on the ground; a repeat of that could help lead the Bills to a 2-0 start on Monday night, but it will require a larger workload from the likes of Jordan Phillips, DaQuan Jones and Tim Settle.