After getting knocked out of yesterday’s win over the Panthers, Giants defensive lineman Leonard Williams underwent an MRI and other tests to determine how much time this injury would cost him, according to Josh Alper of NBC Sports. The results indicate that Williams suffered a sprained MCL, according to NFL Network’s Ian Rapoport. 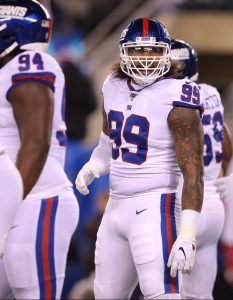 Following the game, Williams spoke with the media and informed them that “he did not think the injury was a serious one.” While he is expected to miss some time, the resounding conclusion is that the Giants and their veteran lineman avoided a serious setback. Head coach Brian Daboll told the media that it was “better than it could be.”

While New York has seen a few injuries to the top end of its defensive line, this latest ailment might not be the worst timing. The team was without recent high draft picks Azeez Ojulari and Kayvon Thibodeaux, who was drafted fourth-overall this year, in their first two games of the season. Fortunately for the Giants, both Ojulari and Thibodeaux have been practicing and are expected to be available this week as New York looks to improve to 3-0 in a Monday night matchup with the division-rival Cowboys.