The Raiders entered the season with one of the most highly-regarded skill-position groups in the league, but a number of questions on the offensive line. That was reflected by a rotation at multiple spots in Week 1, something which is expected to continue tomorrow. 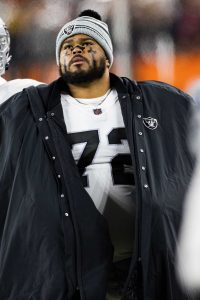 As noted by Vincent Bonsignore of the Las Vegas Review-Journal, the team deployed two players at both right tackle and right guard, with starters Jermaine Eluemunor and Dylan Parham sharing time with Thayer Munford and Lester Cotton, respectively. Overall, the Raiders allowed five sacks in their loss to the Chargers, but the play of that quartet drew praise from the coaching staff, including offensive coordinator Mick Lombardi.

“I think they’ve earned the right to play again this week,” he said of the aforementioned linemen. The two starters drew encouraging PFF grades, but Bonsignore adds that Munford “will remain in the mix” for significant playing time. Of course, outside additions remain a distinct possibility as well.

The Raiders hosted a number of veterans earlier this week, including Billy Price. That resulted in a practice squad deal for the 27-year-old, who was a full-time starter for the Giants last season. In addition, Vegas worked out former Cardinal Justin Murray recently, along with far less experienced options in Myron Cunningham, Shamarious Gilmore and Willie Wright (Twitter link via SI’s Howard Balzer).

“We’re playing the guys that deserve to play,” head coach Josh McDaniels confirmed. “There are seven guys that played [Sunday] because they earned the opportunity with their performance throughout the course of the preseason and in training camp.”

With the rotation apparently set to continue for the foreseeable future, the Raiders will look to find a full-time starting unit while aiming for their first win tomorrow against the Cardinals.

One comment on “Latest On Raiders’ Offensive Line Situation”