Andy Dalton might soon make a start for a fourth team in four seasons. The Saints have now held Jameis Winston out of practice for each of the past two days. 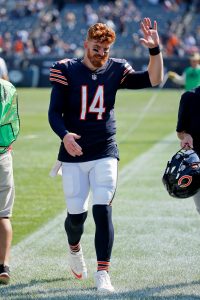 Dennis Allen said Wednesday the team planned to have its starter available for its Thursday practice in London, and although OC Pete Carmichael added a plan is in place for Winston, the former No. 1 overall pick has admitted he is playing through pain. Winston is dealing with four back fractures, though he logged a Thursday practice leading up to New Orleans’ Week 3 game.

The Saints signed both Winston and Dalton this offseason, bringing back their 2021 starter on a two-year, $28MM deal ($15.2MM guaranteed) and adding the longtime Bengals QB1 for one year and $3MM. Dalton did not compete for the Saints’ starting job, but Albert Breer of SI.com notes the Saints were really impressed with the 12th-year veteran during their training camp. Considering the situation, it would certainly not surprise if the team went with its healthy backup against the Vikings on Sunday.

Although Winston used his new receiving corps to rally the Saints back from a Week 1 deficit in Atlanta, he threw three interceptions against the Buccaneers and had the Saints down two scores against the Panthers for most of the team’s Week 3 loss. Winston ranks 26th in QBR through three games.

Winston, 28, spent the offseason rehabbing the ACL tear that ended his 2021 campaign, but a report indicating he suffered fractures in his spine emerged ahead of the Saints’ Week 2 game. Following the team’s loss to the Panthers, Allen said a quarterback switch was not being considered. Winston starting against Minnesota was clearly the team’s plan, given that he traveled to London with the team. If Winston is not at practice Friday, however, it will probably be Dalton who receives the call.

Dalton, 34, entered last season as the Bears’ starter and made nine starts in relief of Dak Prescott in 2020. The TCU product has 148 career starts. While Dalton is far removed from his Cincinnati heyday, he profiles as one of the league’s better backup options. Dalton went 3-3 as Chicago’s starter last season, though he did finish with a career-low 33.6 QBR figure.