The Lions offense continues to get bitten by injuries as two key offensive players were officially ruled out for Sunday’s game against the Seahawks, according to Ian Rapoport of NFL Network. The team will attempt to catch up to the rest of the NFC North without running back D’Andre Swift and second-year wide receiver Amon-Ra St. Brown. 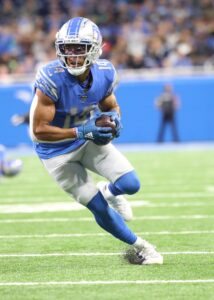 Swift started off the season with a bang. During the team’s season-opening loss to the Eagles, Swift carried the ball 15 times for 144 yards and a touchdown. Since then, some different ailments seem to have slowed Swift down as he’s only had 12 carries for 87 yards in the past two weeks while playing less than half of the team’s offensive snaps during that time frame. Head coach Dan Campbell has suggested that Swift could be out through the team’s bye week, according to NFL Network’s Tom Pelissero. Swift would only miss the Lions’ next two games in that scenario.

Luckily for Detroit, they roster one of the league’s more experienced backup running backs in Jamaal Williams. In the past two games which saw a lower usage of Swift, Williams had 32 carries for 140 yards and two touchdowns. Those numbers are also while playing fewer than half of the team’s offensive snaps. With Swift out, Williams should have an opportunity to really take the running game over.

Many called for a breakout sophomore season for St. Brown and, so far, he has delivered. After the first three weeks of the season, St. Brown leads the team in receiving yards with 253. He also ranks in the top-ten of league receivers in receptions (6th with 23), receiving touchdowns (2nd with 3), and receiving yards per game (10th with 84.3). St. Brown has been a dominant favorite target for quarterback Jared Goff and his absence should be a cause for concern.

His absence is even more of a concern since his fellow starting receivers, DJ Chark and Josh Reynolds, were both limited in practice this week with ankle injuries. Both Chark and Reynolds are listed as questionable going into the weekend. With St. Brown out and rookie first-round pick Jameson Williams still awaiting his rookie debut while recovering from a torn ACL, losing Chark and Reynolds would leave Detroit with only Kalif Raymond and Quintez Cephus as healthy pass-catchers. In the unlikely event that Raymond and Cephus are the only two healthy receivers for Week 4, the Lions will likely be forced to use their two practice squad call-ups on any of Tom Kennedy, former USFL-star Maurice Alexander, and undrafted rookie Josh Johnson.

Regardless, of the availability of Chark and Reynolds, the losses of Swift and St. Brown are daunting. The two-game stretch that Detroit could be without Swift consists of two opponents with identical 1-2 records. It’s hard to say that those win-loss totals mean much this early in the season, but the Lions will certainly hope that this is a softer section of their schedule where they’ll potentially be without their lead rusher and receiver.